A Life in Cinemas 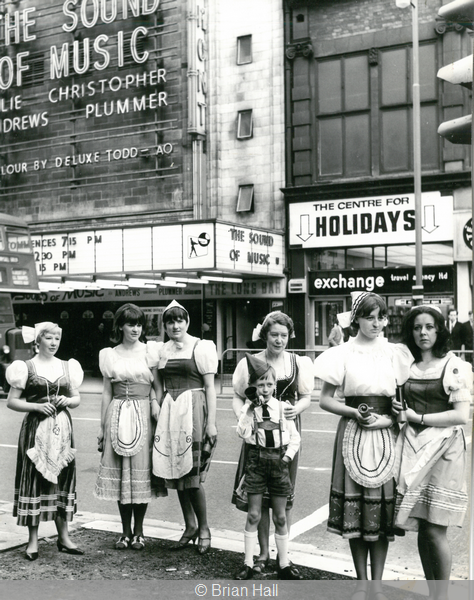 Staff promoting The Sound of Music outside the Gaumont Cinema, Manchester

“There’s no future in cinemas". This was my mother's reply when I told her what I wanted to do when I left school in 1956.

TV was booming; she believed cinemas were fading and she wanted to me have a solid, successful and, most of all, stable career. For a boy who had become caught in the spell of the movies it was a bit deflating. When I told her that I had got a job with Odeon in 1963 she didn’t sleep for a week. The experience of cinema is very different now for the audience and staff, but I got to enjoy the best period as a boy growing up and later working in them.

My first cinema experience was the Tatler News Theatre at the age of nine. I was there before the doors opened because I liked the atmosphere in the theatre. It was usually a ninety-minute programme that typically consisted of a cartoon, a travelogue, three newsreels and a comedy short - and all for a shilling.

When I moved to senior school I made a friend who loved the movies and began a regular Friday night visit to the cinema. I let him pick the films at first because I didn’t know Doris Day from Susan Hayward in those days. We went everywhere - the Regent, Hippodrome, Tivoli, Palace, Opera House, Pavilion, King Edward and Ritz to name a few - and we saw everything. I discovered I loved everything from musicals and epics to westerns and Martin and Lewis. There was no other town like it for variety of cinema and the large choice of film.

At sixteen I had a friend whose brother was second projectionist at the Palladium when The Ten Commandments was first playing. I was invited into the projection box two nights a week and got to see behind the scenes for the first time. I even got to pull the switch to change the reels on the projectors. I was hooked.

The technology was different then and films arrived in several cans which then had to be joined and loaded onto spools. Even then the feature did not fit onto one spool so there were two projectors which were used to show a film. As a spool came to an end there was timed changeover between projectors while the film was playing, which was supposed to be seamless and unnoticeable by the audience.

I left school and began working for Fylde Water Board until one day a co-worker brought in a cutting from a national newspaper that advertised Odeon cinema manager opportunities. She handed it to me saying “You can do this Brian, all they do is stand in the foyer in a dress suit and watch movies”. I was sure there would be more to it than that.

I was interviewed at the Odeon Blackpool on Dickson Road by the area manager. One question I still remember was: “How do you feel about taking instructions from a woman?” The assistant manager at Preston, where I would do my training, was a highly thought of manager who was also a woman. “No problem” I said.

They never placed a trainee manager in their home town because it would put them in an awkward position if friends and family turned up expecting free tickets, so I only ever worked Blackpool Odeon once as a support when it reopened after the screen was replaced for a CinemaScope. It was a special VIP night and the film was Topkapi.

The Great Escape had been on for a week when I started at Preston. It had been pre-booked for a fortnight, which was rare at the time and a sign of the film's predicted success. Luckily for me Preston wasn’t that far from home.

After three months I was allowed to wear a dress suit. This was a significant milestone for an assistant manager. At the time is was an important part of cinema protocol and staff personal presentation was considered extremely important. Every day there was a staff parade in which all staff were inspected for the standard of their dress and uniform, but the manager on duty was the person most visible and had to be extremely smart. The first time my young daughter saw me in my dress suit she said “Daddy, you look like prince". It can’t get better than that.

After Preston I was moved around but eventually placed at the Gaumont in Manchester. This was an amazing time in an amazing cinema. The Wurlitzer there made it feel a little bit like home and the regular organ concerts were a familiar sound.

The Sound of Music was playing when I started in 1965 and continued to play for two and a half years, regularly filling the 2004 seats. At the time it broke all box office records and saved 20th Century Fox and we didn’t do too badly either, even winning awards for ice cream sales. Though eventually you do get tired of listening to “Do Re Mi”.

Following Manchester I became manager at Stafford and then Sutton Coldfield, earning bonuses when films did well and not when the films were not popular. Taking my family on holiday all depended on the quality of the films, which motivated me to make them as successful as I could - not always possible with some films.

I organised a beetle car race to promote a Herbie movie. I dressed up as a knight, a cowboy, a roman soldier, and more, trying to get bums on seats. I turned people away when the queue went around the building for films like Star Wars, ET, Crocodile Dundee, and Ghost and was told I would burn in hell for playing The Last Temptation of Christ. I became a figure in my community because cinema managers were very visible then.

It was a great career (and mostly stable), where I got to work with good people and occasional characters, met my wife and had lots of laughs. Sadly, this cinema experience doesn’t exist anymore. However, I would never have had this life if I hadn’t developed the passion for film I got from living in Blackpool.