Golden Mile Sideshows: Luke Gannon and the Rector of Stiffkey

The Palace of Strange Girls, once home to the sideshows of Luke Gannon, Planning Department Collection

The Golden Nugget building situated on the corner of Brunswick Street and the Promenade was at the heart of Blackpool’s Golden Mile. It was the most lurid and notorious and hordes of visitors were easily parted with their hard-earned money thanks to Luke Gannon and his garish sideshows.

In the 1930s showman Luke Gannon staged his ‘starving brides’ there and exhibited the unfrocked Rector Stiffkey in a barrel. The stunts made national headlines but did much to tarnish the resort in the eyes of outsiders. At the Town Hall they frowned on his schemes and looked for every chance to prosecute him.

Luke Gannon was born in Burnley and worked as a weaver before he came to Blackpool in 1924. He had a long and tawdry record as huckster and tipster behind him when he hit gold in the 1930s. During this period Luke Gannon made money from a series of starving brides and bridegrooms, living in glass cases for a fee of £250 for 28 days of fasting.

He exhibited a woman called Joyce Heather; newly-wed Joyce had to live in a large barrel while the crowds peered through a glass window. She had to survive 10 days without food or water - the first of the starving brides. The prize was £200 but Joyce quit on day nine. Speculation about where she had received anything for her ordeal angered the crowds and Luke faced an angry mob on the forecourt.

The crowd rolled the barrel across the Prom and on to the beach and the commotion blocked the Promenade. Luke loved every minute.

Luke Gannon made lots of money and was said to be a generous man, but at the time there was a story going around that a wino staggered along the Prom with the sole of his shoe flapping and said to Luke, ‘I knew you when you had nothing’. Luke took out a bundle of fivers, removed the elastic band and handed it to the wino, saying ‘Put this round your shoe, it will stop it flapping’.

One of the most memorable and bizarre attractions ever to appear on the Golden Mile in the 1930s was the Rev. Harold Davidson, the rector of Stiffkey, Norfolk. In 1932 he was accused of immorality by the Church of England Consistory Court. He was a good family man and had five children but the locals noticed that every Monday morning he caught the train to London and it later emerged that he spent his time trying to reform the street girls in the West End. 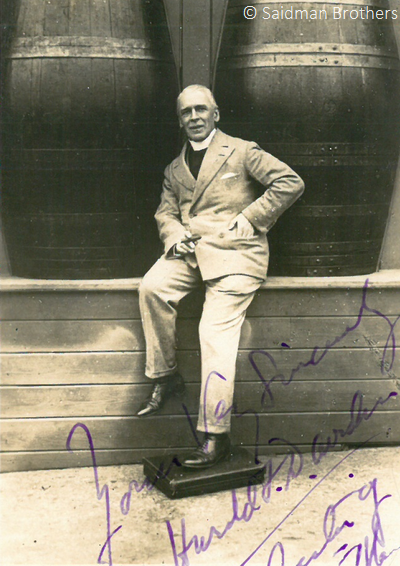 Despite stating his innocence, the ‘Prostitutes Padre’, as he was named, was defrocked. He continued his ‘mission’ among prostitutes and earned a living by appearing on the music hall stage. He was an actor before he was ordained. However, rather than helping these fallen women, it was said that he helped them on their way to immorality.

In 1933 Luke Gannon sensed the opportunity of bringing Davidson to Blackpool and exhibiting him in a barrel as ‘The Starving Ex-Rector of Stiffkey’. He was to be Luke Gannon’s greatest money-maker. A special barrel was made and fitted with a window, cushions, an electric light and a chimney, to enable him to smoke cigars.

The former cleric was booked to go without food for 14 days and huge crowds of holidaymakers queued to pay two pence for the privilege of peering through the window, watching him draw cartoons, which he sold to the public.

The crowds were so great that they spilled onto the road and stopped the traffic, causing the police to issue summonses for causing obstruction. The next day Gannon and Davidson were each fined two pounds. Then along came the bailiffs who wanted to serve Davidson with an order to pay a debt of £43. They chased him along the Promenade to his rooms and hammered on his locked door as the ex-rector escaped down a drainpipe. He was later caught and sent to prison.

On his return to Blackpool in 1935 for another Golden Mile starving season, the disgraced priest was exhibited by Luke Gannon in a glass coffin. The Council seized another opportunity to stop the showman. They had Davidson arrested and charged him with unlawfully starving with the intent to commit suicide. But a doctor told the court that 10 days’ rest had done Harold good and he was fitter than when he began. The case was dismissed and he later received £382 damages from the council.

His next appearance on the mile for Luke Gannon was in a freezing refrigerator and then in a roasting oven with a model of the devil prodding him with a pitchfork. On another occasion Davidson was in a barrel with a ‘half-naked bird’. People expected to see a half-dressed girl but what they saw was a budgerigar whose feathers never grew!

‘Have you seen poor old Stiffkey, the lad from the village?’ read signposts along the Mile accompanied by a picture of a silly-looking parson.

Eventually the defrocked rector’s popularity ran out in Blackpool and his next ‘engagement’ was giving sermons in a lion’s cage in Skegness, with two circus lions named Freddie and Toto. Unfortunately, on 28 July 1937, he trod on Freddie’s tail and the beast attacked him. Davidson was pulled from the cage severely mauled and he died two days later. His final words were: ‘Inform the London papers’.

Harold Francis Davidson’s body was taken back to Stiffkey, where he had been a rector for 26 years, and he was buried in the presence of 3000 people who had flocked in to see the final chapter of an extraordinary story.

Luke Gannon - ‘the Blackpool Barnum’ - died on 6 October 1939 and was cremated at Carleton cemetery. It was his request that here should be silence in the chapel and that no word should be spoken by a minister of God. The silence was broken by Chopin’s Funeral March played on a gramophone and masked by a green curtain. In the evening a man walked out of the chapel into the garden of rest. He stood there for half a minute before opening a small urn and spread Luke’s ashes over the roses.

No one was there to see him. There was just whispering of the wind in the nearby trees. Luke Gannon – a showman until the end.