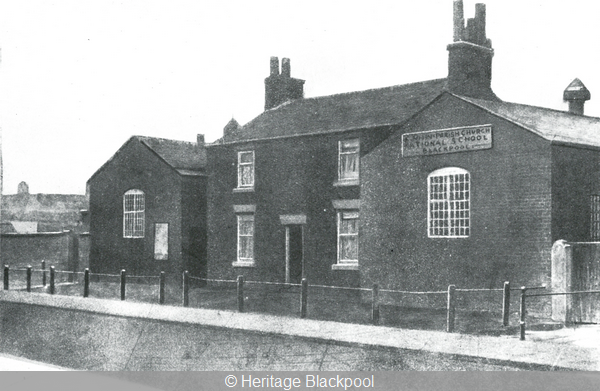 The founding of St John’s school began in 1817 when Blackpool was a mere village with a population of around 750.

The story begins with John Gisborne, a visitor from Derbyshire, who from 1812 stayed regularly in Blackpool for the sake of his wife’s health and finally settled in the area when it became essential that she should live by the sea.

John was concerned about the welfare of the local children, so he resolved to raise subscriptions from residents, friends, and visitors to build a school.

Within two years he had raised £50 to buy from the executors of William Yates a plot of land on Poulton Road (present Church Street). Situated at Raikes Hill it was then a pleasant country lane set in fields with a good view of the surrounding countryside, offering the only way into Blackpool and to where the cows were driven daily from Newton Drive fields to be milked in shippons at the back of the site chosen for the school.

John Gisborne’s school was built on the purchased plot from the remainder of the subscriptions raised, some £621 in all. When it was built, fourteen windmills were said to be in sight.

The school consisted of a ‘boys’ section and a ‘girls’ section and having a house for the master between them. The occupying master of the house was paid £50 a school year. Thus the first free school for the poor children of Blackpool opened in 1817 with forty scholars as The Blackpool National School. By common usage it became known simply as St John’s, although at that time it had no connection with the later church of the same name and was free to all denominations.

The first master of the school was Anthony Hodkinson, followed in 1825 by John Walmsley who also traded as a grocer. The third headmaster from 1866-1906 was WJ Brown. Nicknamed ‘Cocky Brown’ he had a reputation of being an able schoolmaster, a firm believer in discipline and not sparing the rod. Diligence in school was rewarded by Mr Brown, allowing the pupils to hunt caterpillars on the cabbages in his garden and to gather the fruit when in season.

From 1862, every school was required to keep a log book of important events at school - here are a few examples:

10 March 1879 - a little child named Marsh met with an accident today, being knocked down by a pony outside of school; visited little child, Marsh, and found very ill.

17 March 1879 - I am glad to find the little child, Marsh, is now considered out of danger. (Cocky Brown- a caring headmaster)

21 November 1879 - many children away from school with scarlet fever - 3 children died in infant school - Medical Officer of Health ordered school to be closed.

Excursions and outings were also recorded in the log. In 1870, 250 pupils, friends and teachers visited the city of Lancaster. A year later, 700 went on a trip to Windermere.

5 June 1885 - the little children with their friends numbering 691 were conveyed in waggonette to Singleton.

Annual excursions also went as far afield as north Wales, Yorkshire and Derbyshire. From the numbers involved, considering the state of the roads and railways some 150 years ago, it must have been a logistical nightmare.

Irregular attendance at the school was due to many causes, not least of which was that in the early years, and with no public transport available, many children faced a long walk to school along winding country lanes often flooded in winter months.

Epidemics were also frequently recorded in the log books, which took their toll on attendances with many deaths prior to 1880 due to diphtheria, scarlet fever and whooping cough; measles and chicken pox occurred regularly.

In 1892 a school inspector reported: ‘The classrooms were excessively crowded and the good order that prevails is all the more commendable. The buildings are destitute of suitable provision for hanging hats and cloaks, and are very poor and unworthy of the parish and teaching given in them’. As the nineteenth century drew to a close St John’s maintained its reputation in the town, as an inspector in 1878 described it as ‘a very good school and excellent in all respects’.

Part of the original school survived into the twenty-first century when the present school opened in September 2009. With the forty scholars in 1817, today the school roll is 210 under the stewardship of Head Teacher Mrs Sandra Hall.